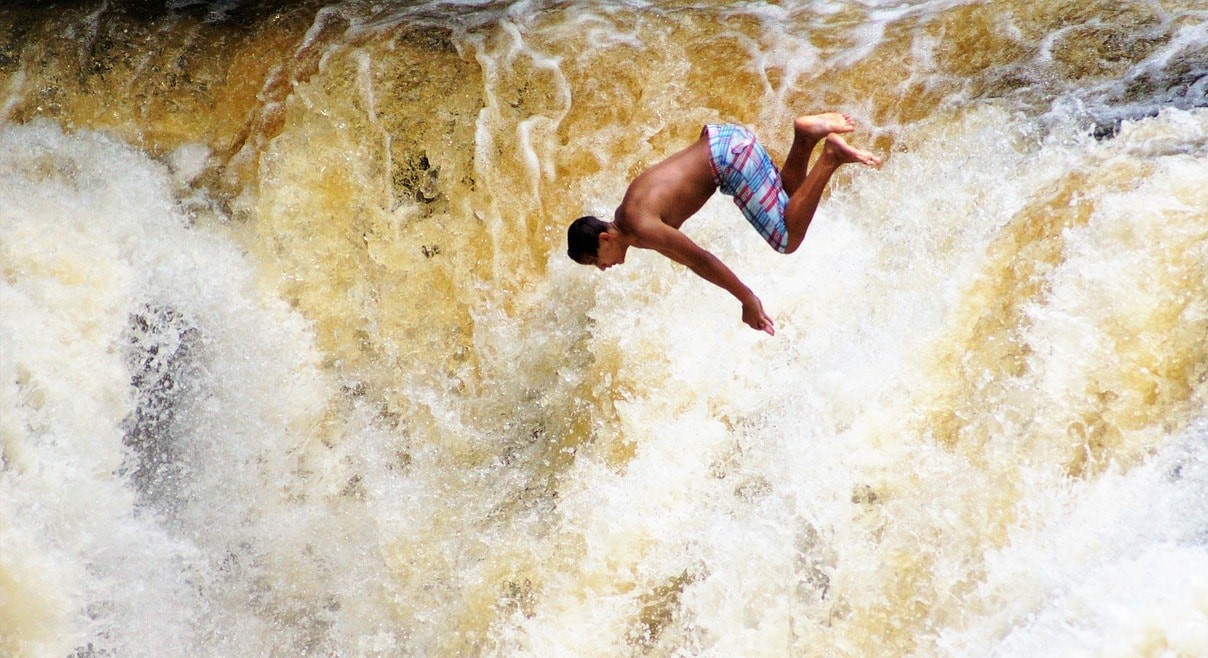 It came. That great and terrible day. That day when law school grades appear, crushing the souls of many—if not most—first-year law students across the country.

For me, getting up the courage to open my first-year grades was unlike any other experience I have ever had in education. But it was a little like the time that I stood in my swim trunks, staring off the edge of a large cliff overhanging a waterfall, debating whether to take the plunge. 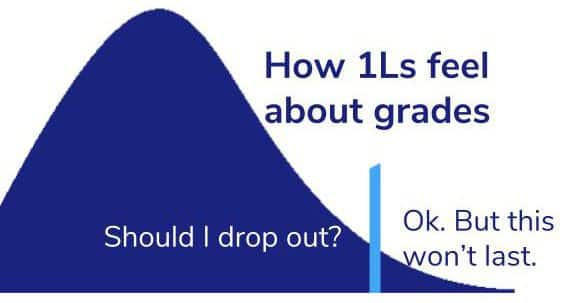 If you haven’t gone to law school, it may be hard to appreciate the trepidation experienced by your attorney-aspiring, over-achiever friends.

With permission, I want to share a story. It’s penned by a good friend of mine about his personal experience. He would like to remain anonymous. But he is someone I deeply respect. I sat by him in at least one first-year class. I was always impressed by his preparation and comments. I always expected he would rock finals.

“The Day My Law School Grades Came Out”

The day that my first semester law school grades came out, I thought my world had ended.

I didn’t do nearly as well as I had hoped. In fact, I did a lot worse than I thought was realistic. We were told over and over that this would happen. We were told that 90% of us would think we would be in the top 10%, and that at least 80% of those would be disappointed (which, by the way, is a gross understatement; try sickened, mortified, shell-shocked, or numb). As a mathematical fact, 50% of us would be in the bottom half of our class (thanks to the curve). Fifty percent of us would not be able to escape that loathed bottom fraction.

The day that my first semester law school grades came out, I found out I was a victim of the curve.

Maybe it’s my fault for having such high expectations. I think I had sound reasoning for believing I would do well, though. I have a Bachelor’s degree in Physics, arguably one of the hardest subjects to study known to mankind. You know the phrase, “It’s not rocket science?”  Well, yeah, it is. So, I knew that being successful in Physics provided convincing evidence that I had strong intellectual capabilities. Add to that this anecdotal evidence: I know of two other Physicists here, and the one whose grades I know about is in the top 15% of his class. Of the two or three other Physicists I know who went to law school, all were in the top 10%. Additionally, I think most of the other students here I know who have technical degrees all did well. So, I figured that, in an arena where the competitive landscape is virtually unknown, I had a pretty good lay of the land based on past success. I suppose, though, as your stock broker will tell you, past success is no indication of future performance.

The day that my first semester law school grades came out, I thought I had overvalued myself.

I was at school in an empty classroom when I found out what my grades were. The day before, my wife and I had agreed to go out to dinner after grades came out, regardless of how well (or not so well) I did. But when I saw my grades, I was instantly embarrassed. I was almost too ashamed to tell my wife what they were. She had always built me up; she had always believed in me. She supported me when I spent so much time at school that I didn’t see my kids for days at a time. I had worked as hard as I possibly could have, and did the very best I knew how, and now I would have to disappoint her. I couldn’t go to her and say, “My grades weren’t so good, but I know I could have done better if I had just done X” because I had absolutely no regrets about my efforts. I didn’t know how I could face her; I felt humiliated.

The day my first semester law school grades came out, I let my heart turn to stone.

My wife still insisted we go to dinner. And, honestly, I couldn’t think of any better way to drown my sorrows than by eating myself into a food coma. On the way to the restaurant, my wife tried to console me. She reassured me that she loved me, and that everything would work out fine. As she spoke, I could hear undertones of “I still need you to provide for this family,” and “Your kids still need a father, and I still need a husband.” I was practically inconsolable, but her unspoken pleadings told me I had to come to terms with my grades and move forward.

The night of the day my first semester law school grades came out, I had to answer the question of what tough people do when things get tough.

It is inevitable that a competitive person will place at least some of his self-worth on his performance as compared to his peers. It is the nature of the trait. Thus, losing, or at least not winning, damages his self-esteem. I am him. However, I knew that, to move forward, I had to find a way to get my heart back, to get my legs under me, and to stay in the game. Thinking of my poor, pitiful self had been exhausting, and I needed a break. I decided to move my mind to thinking about some mentoring I wanted to do at the high school I graduated from. It was hard to fight off the feeling that, with poor law school grades, I would be a worthless mentor (“Hi kids, I’m the dumb guy who is here to help you not be dumb.”), but fight I did. I made sure that the last thing I did before I closed my eyes for bed was to take the first step towards becoming a mentor.

The morning after the day my first semester law school grades came out, I started trying to convince myself that I was still the same person I was before I knew.

I was faced with the reality that my grades would not be getting me a job. I couldn’t say to an employer, “Look my grades are good, so I’ll probably be a good attorney.” I had to find another way to differentiate, but for the life of me, I could not think of one nice thing to say about myself. After a while of forcing good thoughts into my mind, I was able to come up with one thing. A little more effort and I was able to come up with another thing, and soon good thoughts began pouring in. It was practically a religious experience! It felt incredibly wonderful to acknowledge the good things about myself, and to set aside the number that I almost let ruin me.

The morning after the day my first semester law school grades came out, I started being able to put things in perspective.

Law school is an exercise in the margin. What does that mean? How well I did is not the same as the grade I got. Because of the curve, everything is relative. The curve hides the nuances of actual performance. The perfect score is illusive. In thinking about the curve, I am reminded of Michael Phelps at the 2008 Summer Olympics. Phelps was chasing his 7th gold medal, and in the last leg of the 100-meter butterfly, he was trailing the Serbian swimmer. At the very end, just when it looked like the Serbian had Phelps dead-to-rights, Phelps made one last lunge forward, and out-touched his competitor. He won by one one-hundredth of a second! Put another way, the Serbian lost by just as much. Now, does anyone look back on that race and say, “That Serbian guy really sucked”? No! For that matter, can that be said about any of the swimmers that lost in earlier rounds? No! For crying out loud, just qualifying for the Olympics is a remarkable, praiseworthy feat! This is the realm that we, as law students, live in; we are scholastic Olympians. We live in the margin, so half bad is still pretty damn good.

The morning after the day my first semester law school grades came out, I realized I would be okay.

Over the last few years, I have been able to observe my friend. His attitude has really impressed me. He’s stayed diligent and never thrown in the towel. He’s stayed in the game. His GPA actually took a climb. To me the exact number (and its relative position to his peers at a top-forty law school) doesn’t matter as much as the fact that he’s stuck with it, continually outperforming himself. (I mention the ranking of the school but like class rank, that’s a fairly superficial metric as well.) He had fantastic, meaningful work experiences throughout law school. He passed the bar and he’s writing patents now. I have no doubt other great opportunities are on his doorstep.

As he has reflected on how things have panned out, he has shared with me the following insights:

“I have realized that raw go-and-get-it-ness counts every bit as much as my GPA. That single-digit-and-decimals number in that loathed bottom fraction occupies one line, less than 5%, of my resume, and potential employers are recognizing my hard work. I have realized that nobody in my family asks me what my law school GPA is before saying ‘I love you’ and none of my friends ask for my GPA before agreeing to hang out.”

So, if you’re a 1L and your GPA is less than what you’d hoped, take heart. So it has been with almost every 1L that has gone before. They survived and so can you. You are much more than a number.

Or, maybe your finals somehow made it to the top of your professors’ subjective stacks. That number doesn’t define you either.

You may feel lucky. You may have the nagging anxiety that your luck will run out. Take a couple deep breaths. Just accept that your grades may drop and that’s okay.

Or, maybe you’re getting a bit of a big head. If so, rein in your ego. That number may give you a temporary advantage in the employment game, but do not rest on that laurel. Any relative employment power that GPA has will depreciate like the value of a new car driven off a dealer’s lot. Before you know it, very few employers will give undue deference to your GPA and your actual work experience, colleagues, and humility will do the talking.

Can Classical Music Help You Study?

Adam Balinski is a former TV reporter turned attorney entrepreneur. He founded Crushendo and is currently writing a book called, “The Law School Cheat Code: Everything You Never Knew You Needed to Know about Crushing Law School.”